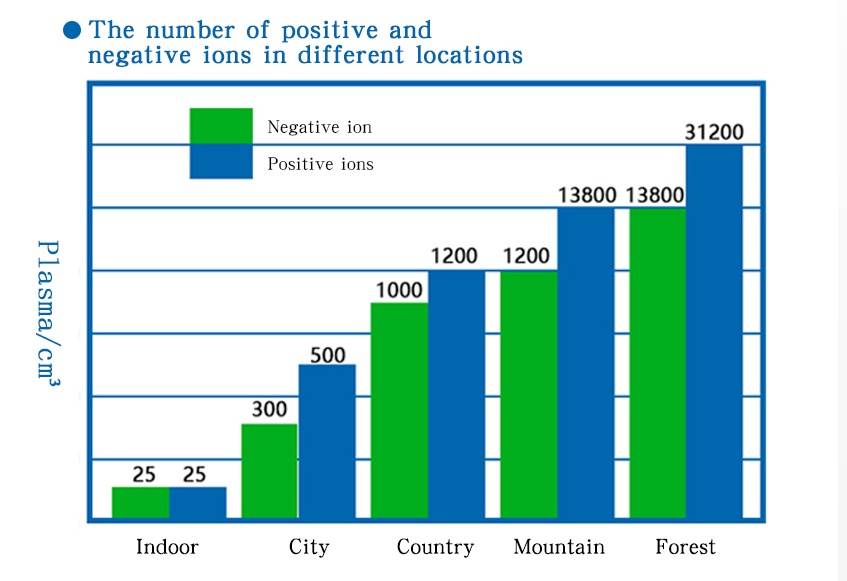 four. Technical traceability:
Air purification itself exists in nature, the perfection of nature's process and unlimited creativity, establishing the scale, process and results of any thing, thus instructing us to understand the mysteries. The Edda air air ionization process mimics nature and develops different products according to different indoor environments. According to the ion concentration in nature, the ions in the indoor air are always supplemented. The ion concentration in nature is 800/cubic. Cm, of which 400 are positive and negative ions. Using ionization technology, we can artificially implement this natural phenomenon, and maintain the life of ions for about 2.5 hours and control the concentration of ions as needed. The ionization process of self-purification of natural air is realized efficiently and harmlessly, so that positive and negative oxygen ions which are the same or similar to the natural world can be generated, and the purpose of indoor air purification is achieved, and the air quality level of indoor air and city park is made. The user "does not leave the house, such as the bath forest."
Lideng Environmental Technology EDDA AIR - Applied physics, chemistry, biology and environmental engineering knowledge, created a plasma air purification technology, successfully achieved Einstein's ionization theory. By simulating the natural air environment, indoor air quality is significantly improved, and various harmful pollutants are effectively and quickly removed and decomposed. This is our belief that "the forest-like air can be enjoyed at home." Our technology solves many traditional problems such as activated carbon, photoion generators, ozone generators, high voltage static electricity, and photocatalysts. Our plasma air purification technology can effectively reduce dust in the air, neutralize and decompose pollutants in the air, disinfect bacteria, effectively control volatile organic compounds, and clean the air effectively! 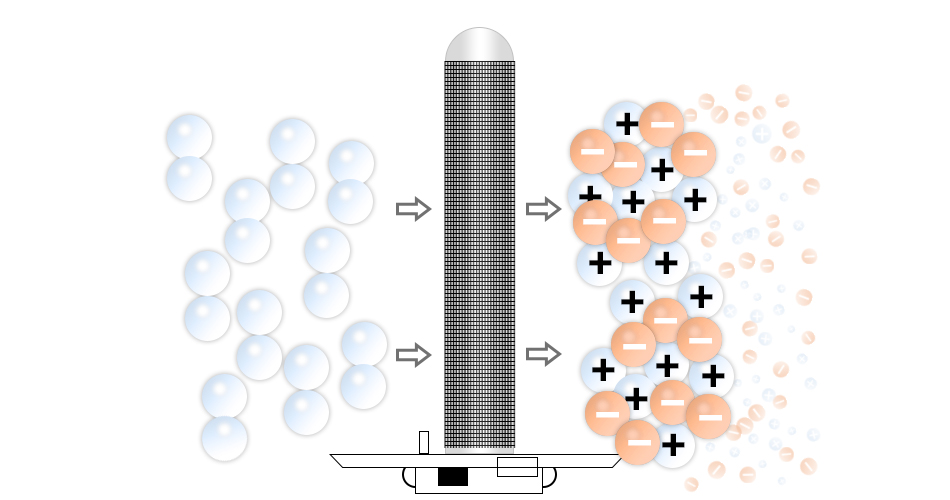 Plasma air action:
Edda Air plasma air is further derived from the ionization theory of Albert Einstein. It is a new technology integrating physics, chemistry, biology and environmental science. It is easy to install in air conditioning equipment, air handling units, Fresh air or air conditioning duct system installation. The release of the ionization tube controls a large number of positive and negative ion groups, actively attacking pollutants and helping us to improve the quality of the air.
It has been remembered in the fresh air of waterfalls, mountains, seaside and after heavy rains. The natural biological climate produced by plasma air technology is rich in reactive oxygen molecules, called ions; the plasma air system creates a positive and can be measured and controlled. The amount of negative oxygen ions, the negative ions contain an additional electron, and the positive ions are electrons that lack the unstable conditions caused by an electron.
Fives. Product Features:
Edda Air plasma air can effectively improve work efficiency (use data in Europe and the United States shows up to 70% improvement), effectively prevent and control infectious diseases based on air and surface, reduce the incidence of respiratory diseases (rhinitis) , asthma, etc.) and skin allergies and other symptoms to achieve cosmetic effects; reduce air conditioning pipeline cleaning frequency and maintenance costs, reduce air static content, enhance filtration efficiency and air conditioning operating efficiency, maximize the use of return air (up to 30% - 70%), reduce fresh air to 30%-70%, reduce the number of loops to 20%, which will save energy consumption of air conditioners by 35%-75%; high cost performance, one-time investment benefits, no wearing parts or Consumables make it easy and simple to use. 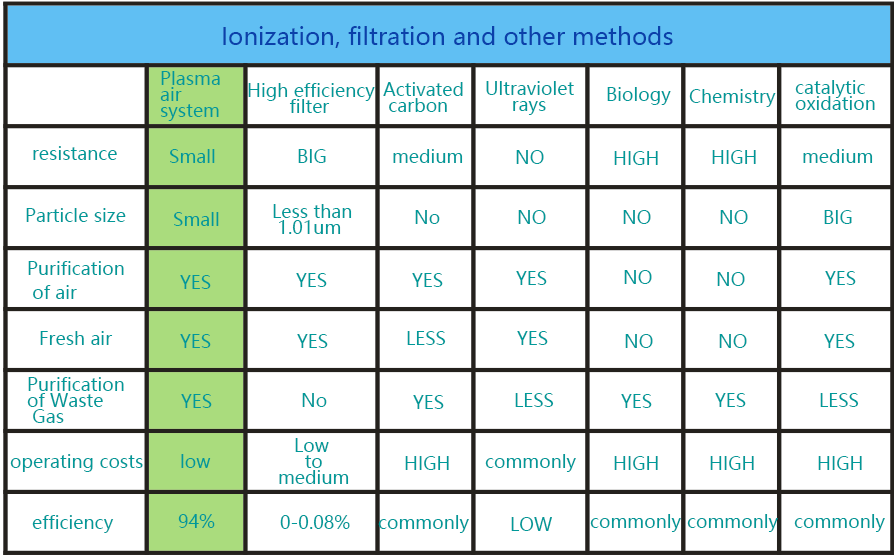 
Seven. Our service
According to the actual situation, free evaluation, testing, trial, and provide professional design solutions for indoor and outdoor environment and governance.
At present, the fresh air system equipment is relatively complicated. In order to ensure the actual effect of the project and the air quality, purification effect and feasibility, it is recommended to select four plasma air system equipment EDDA AIR/PS-508T and install it in the fresh air system equipment (AHU/PAU). / (13000/m3/h) in the wind cabinet, for controlling the source of the pollution source,
Ensure that the harmful odor content is reasonably reduced.
Eight. Certification authority 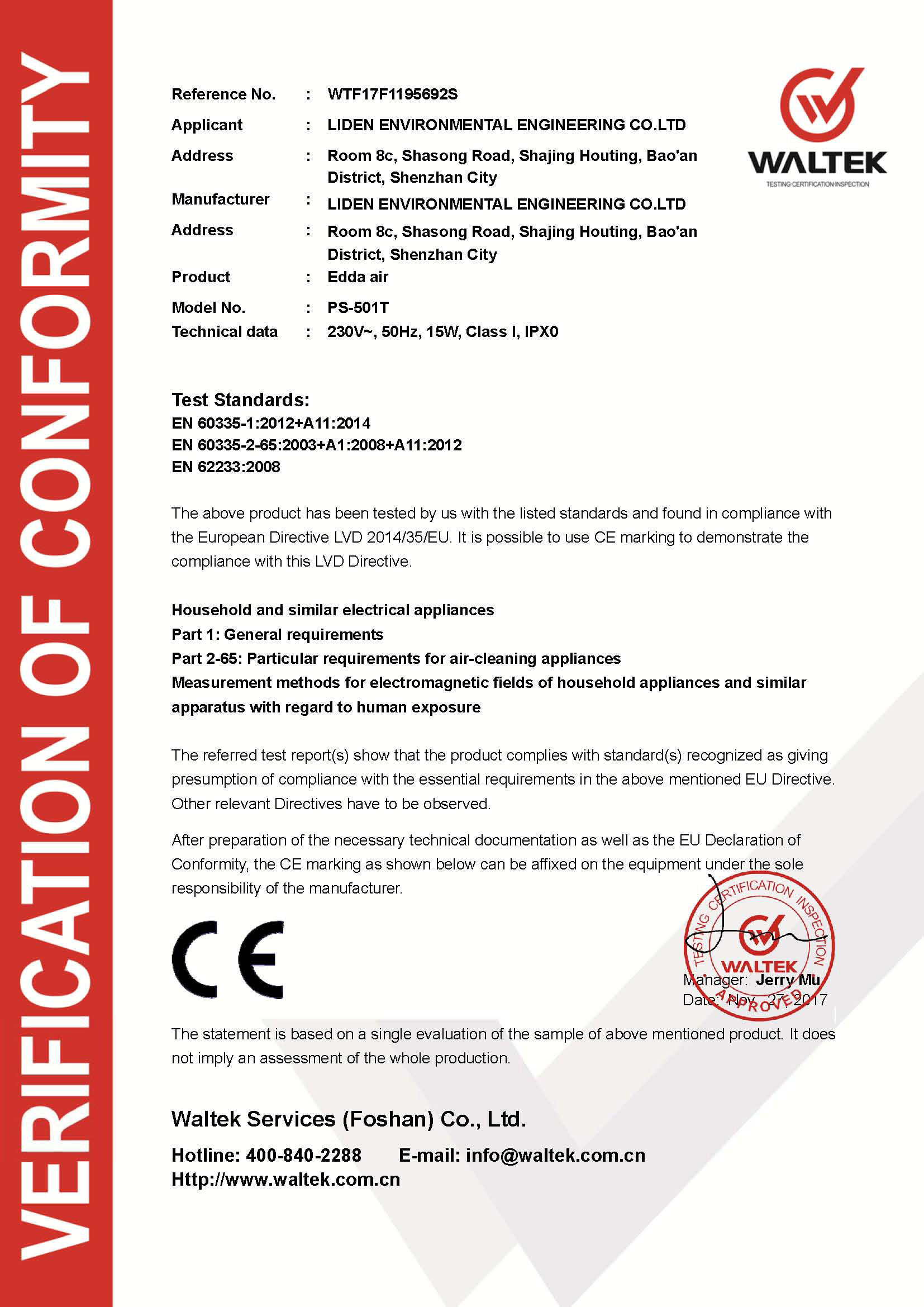 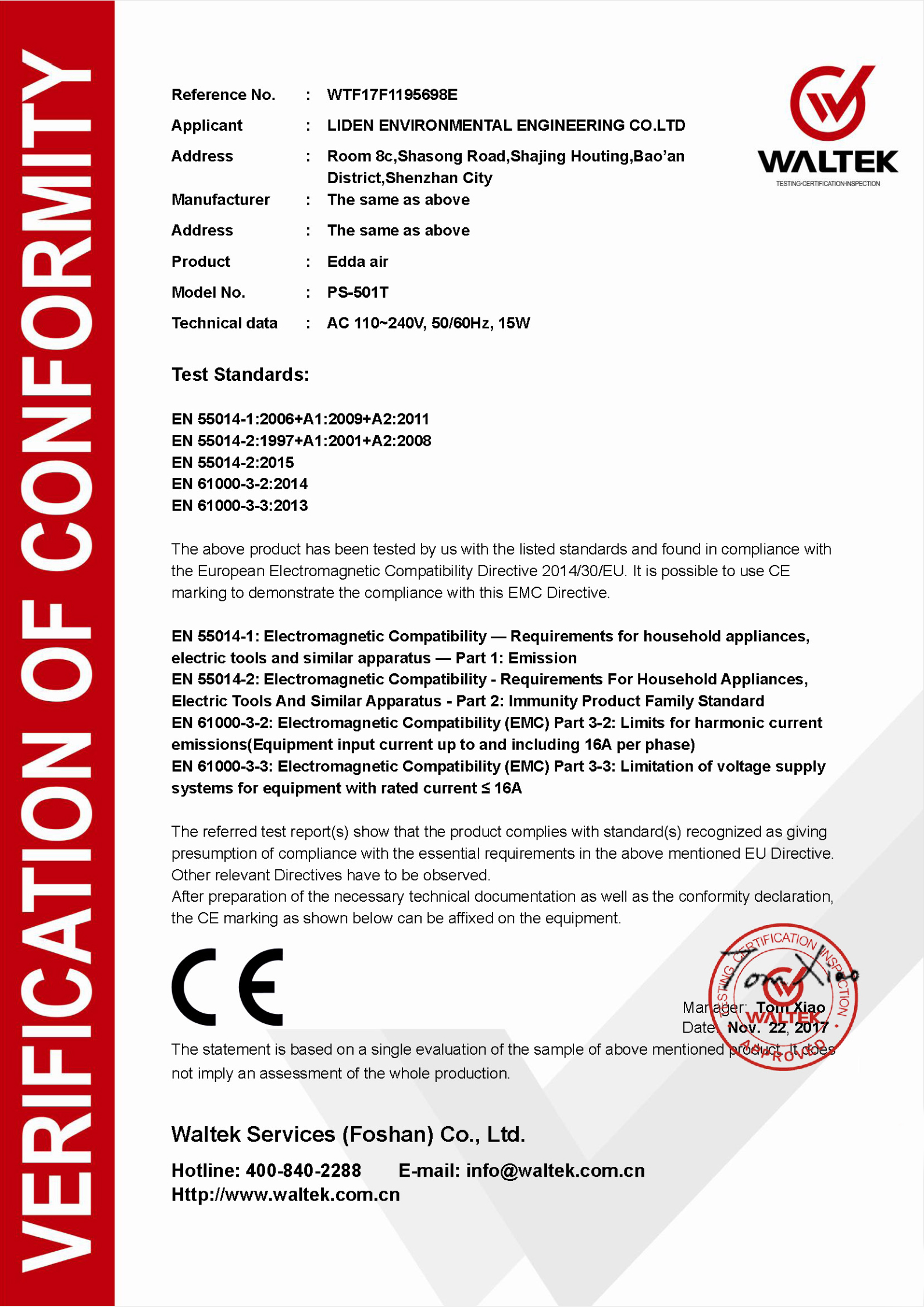 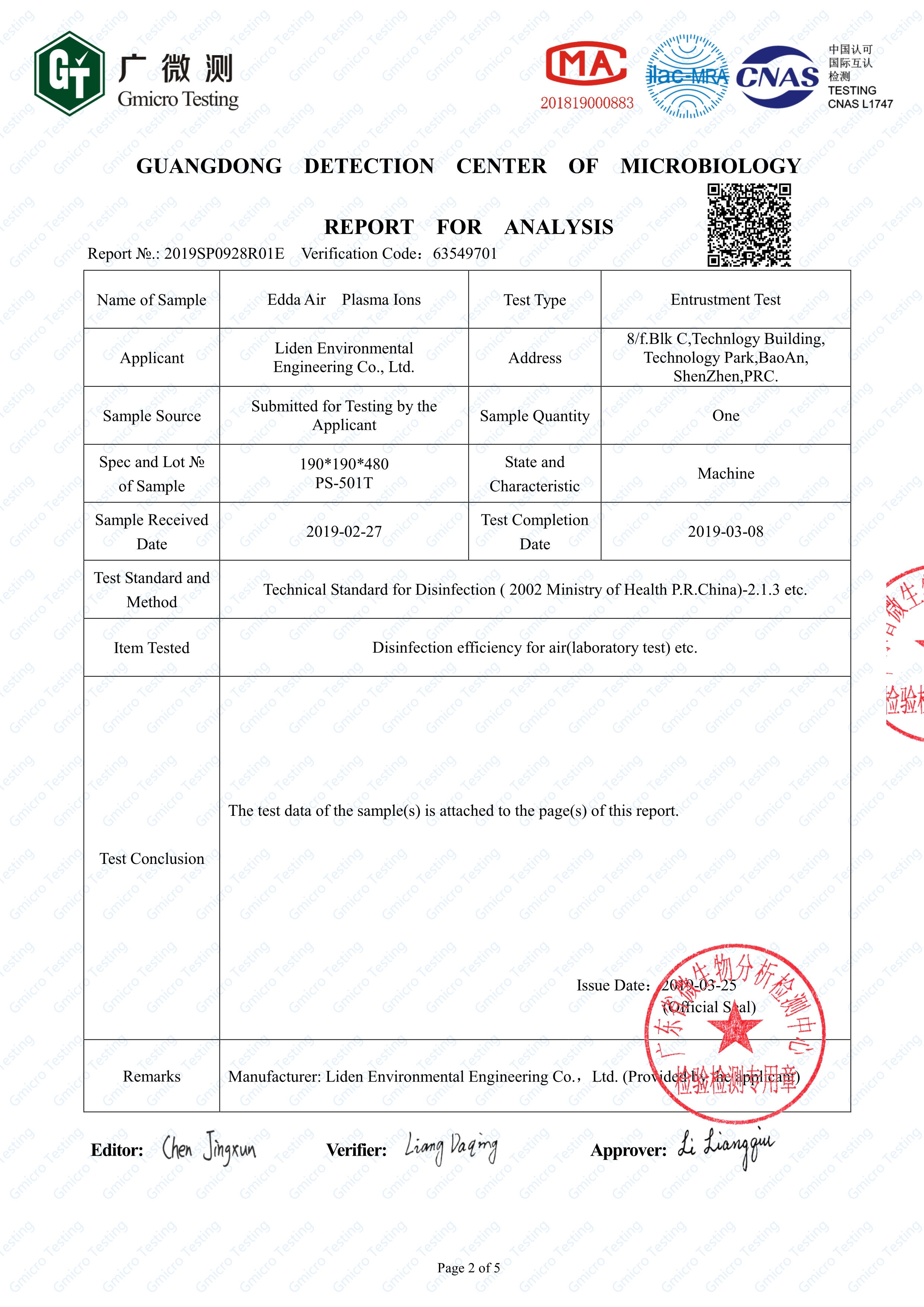 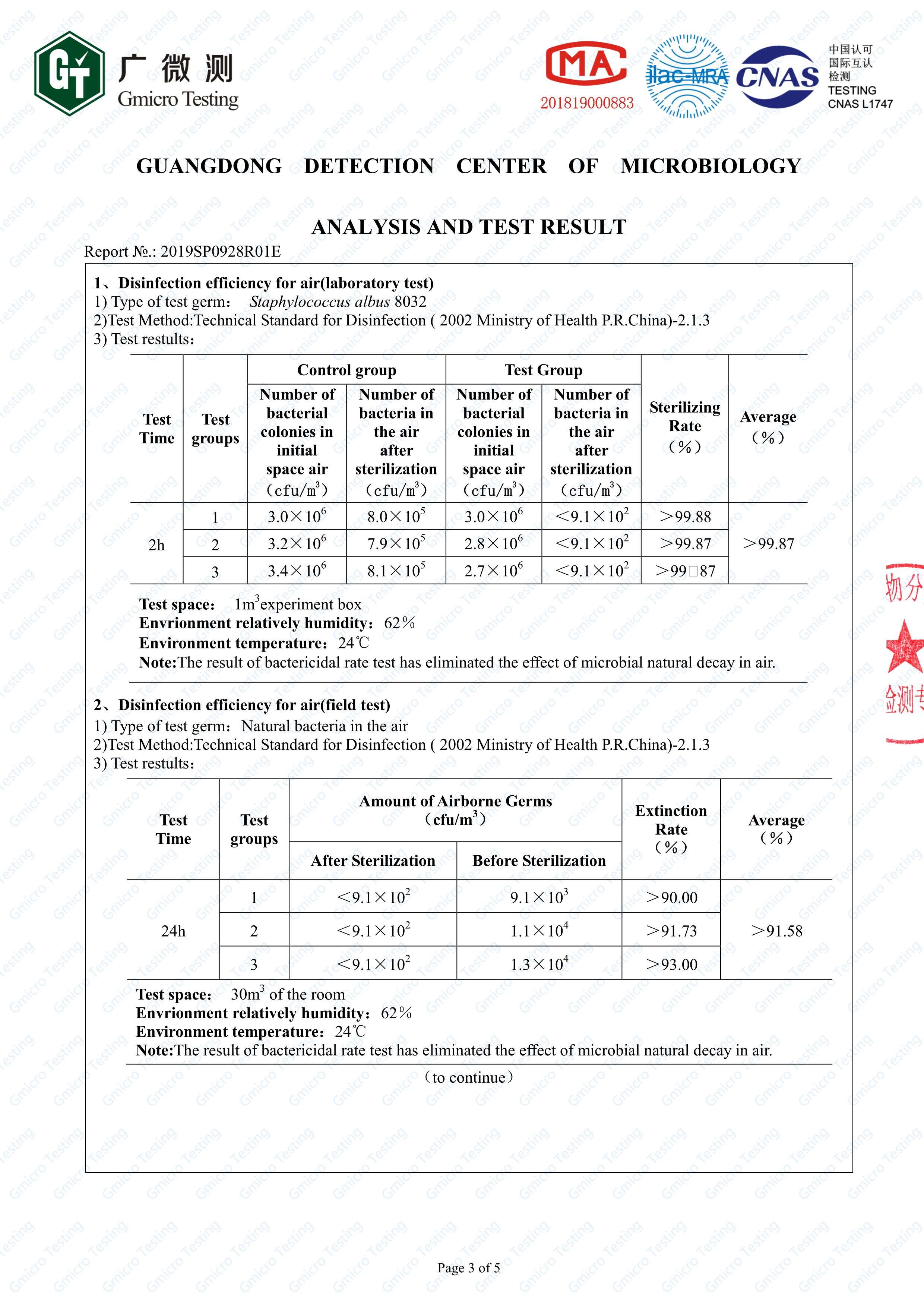 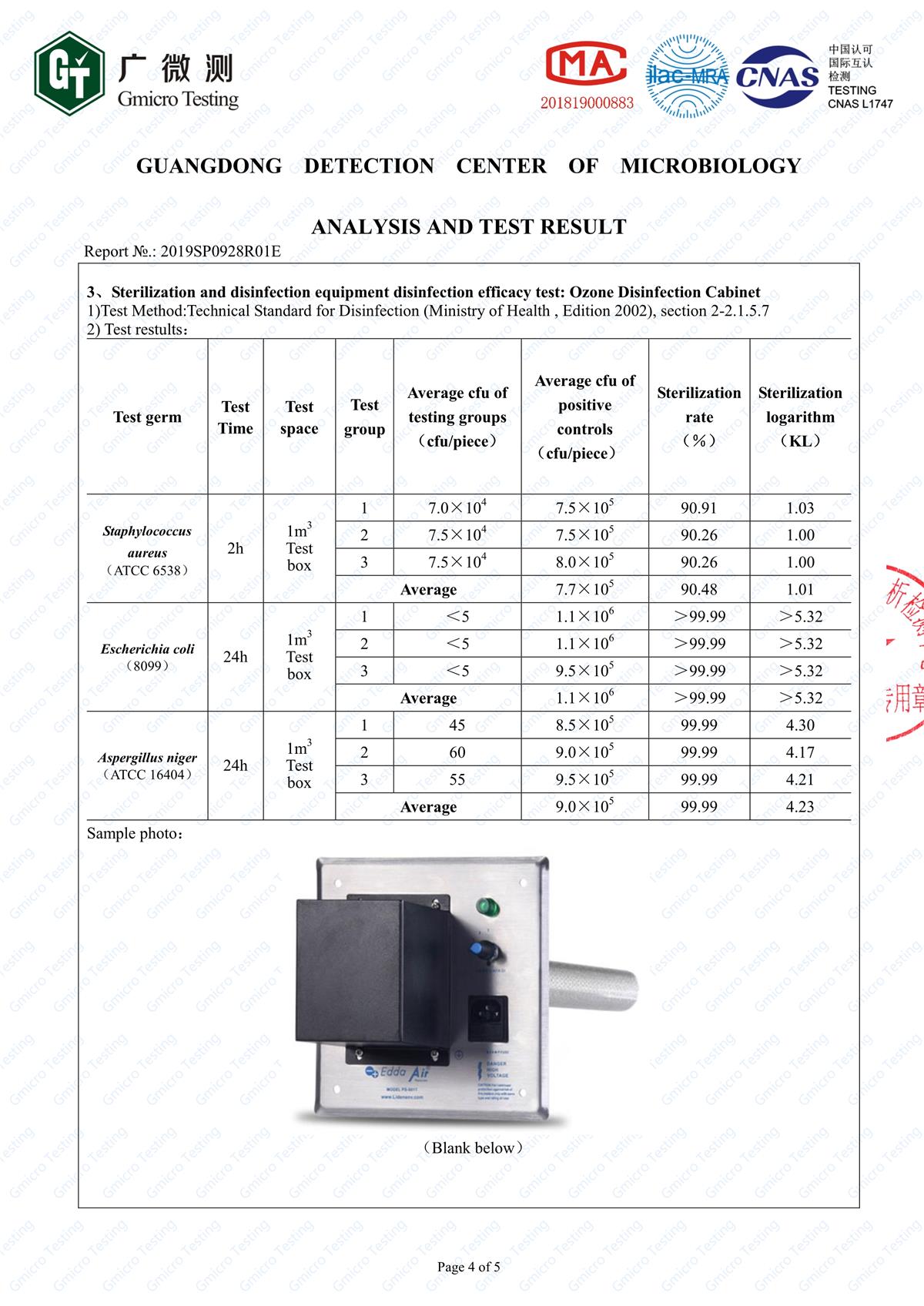 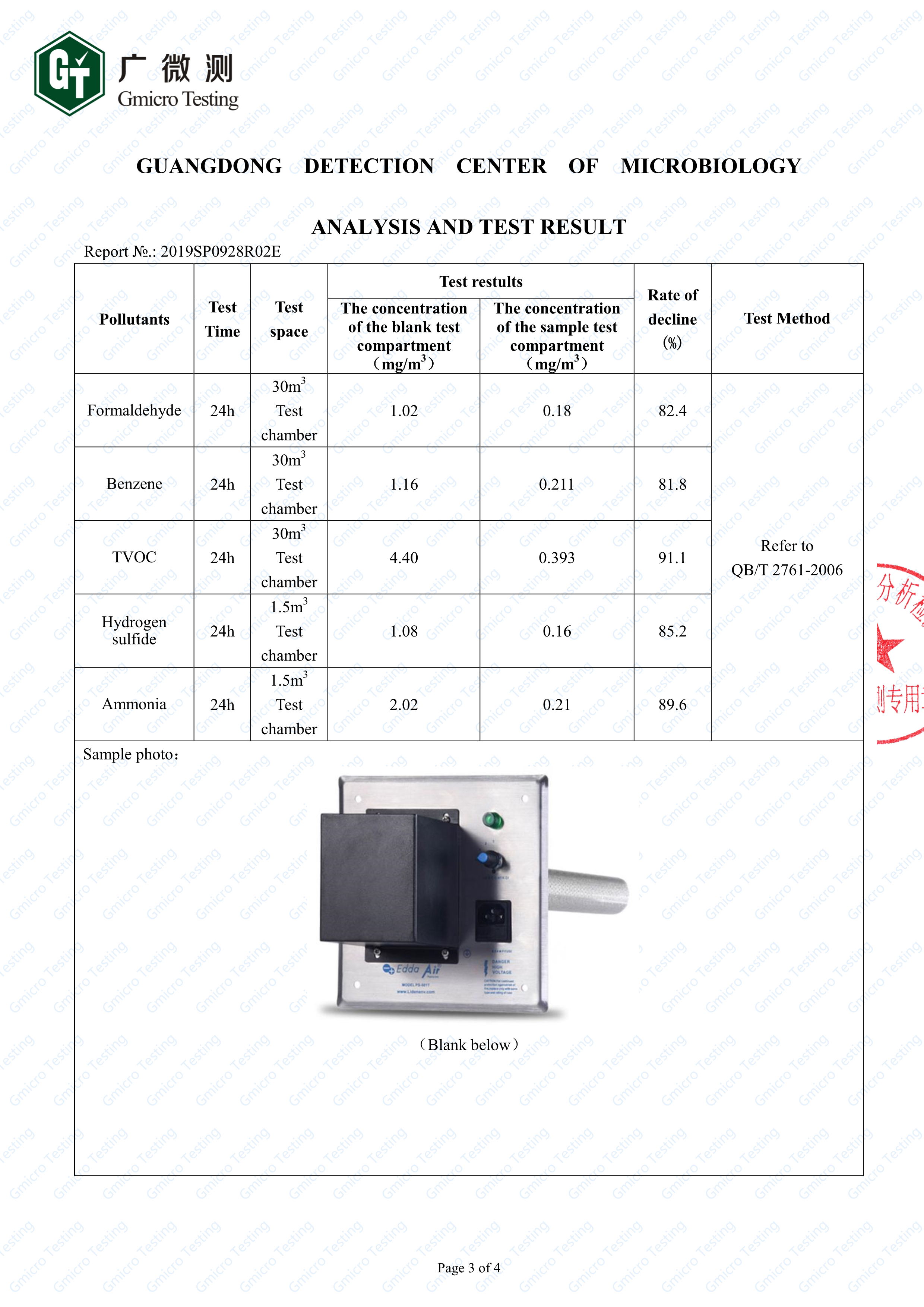 Edda Air plasma air purification system can be directly applied to different parts of today's central air conditioning system, including air cabinet (AHU or PAU), Fan Coil and air-conditioning ducts. It is easy to install and can handle different indoor environments to control pollution sources. The source of the best to achieve the best indoor air effect.
Schematic diagram of the fresh air system↓ 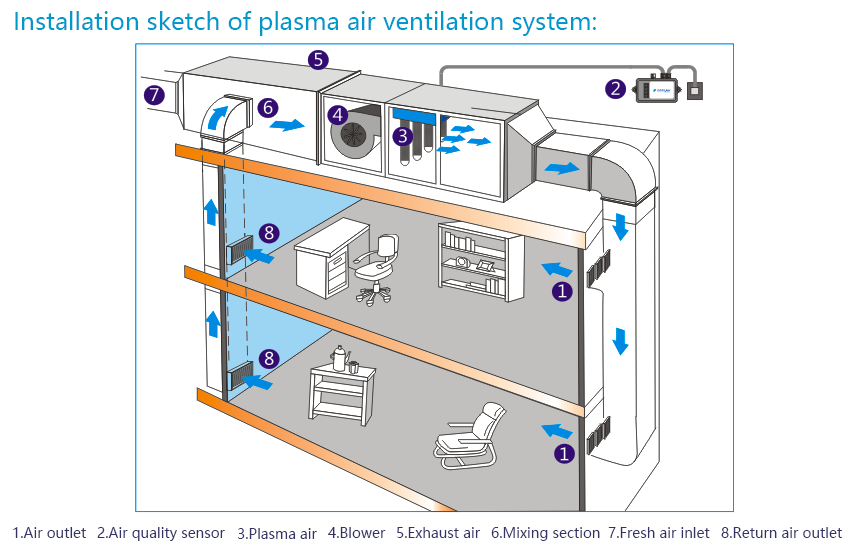 At the end of 2018, all McDonald's products in Hong Kong have been installed 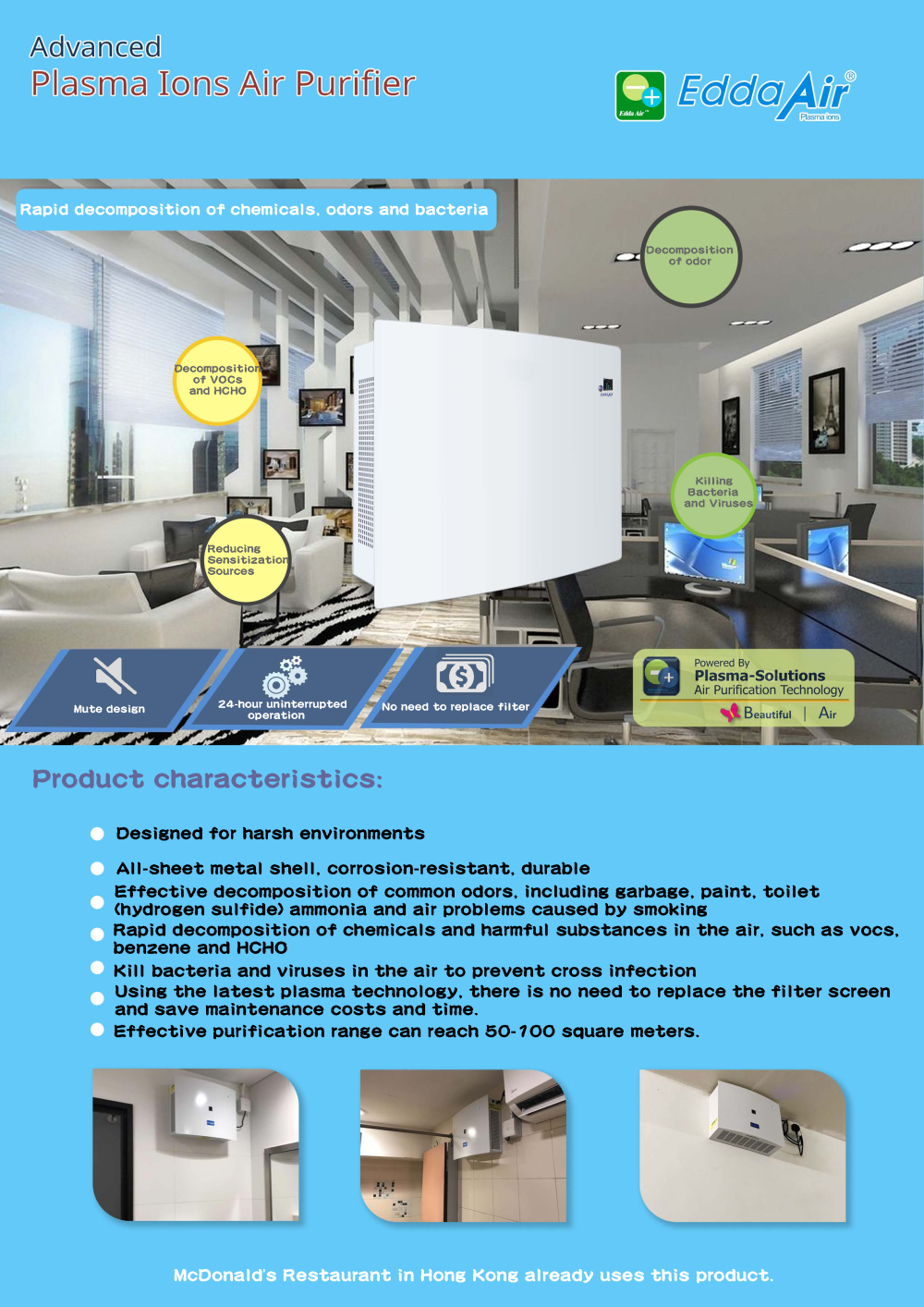 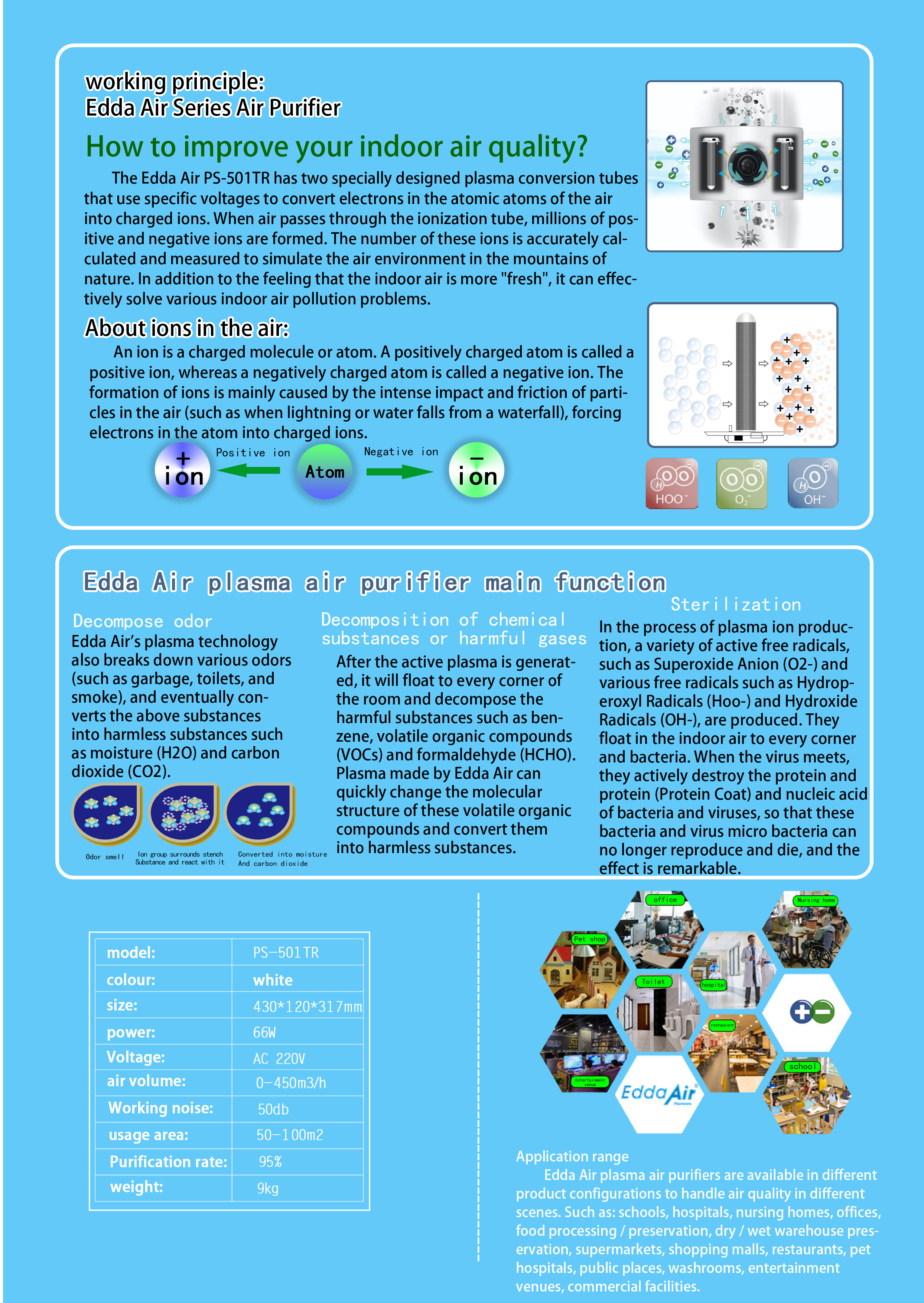 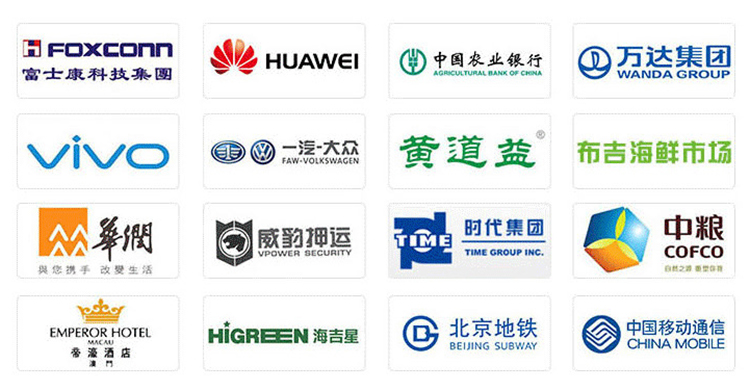 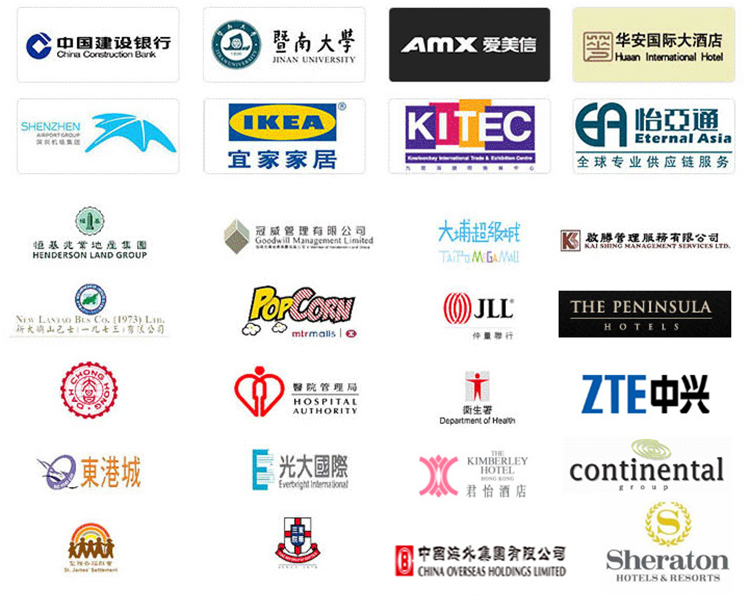 Plasma air system equipment
Description:
This chapter describes the technical specifications for the manufacture, supply, and installation of plasma air equipment.
General requirements:
Equipment must be brand new.
Proper protection should be taken during transportation, storage and installation to ensure that the plasma air equipment is not damaged under any circumstances.
Quality Assurance:
Plasma air equipment parts must be operated for at least two to three years or more (two years warranty, including 24/h/365 days).
System design, system indicators, system equipment, materials and processes must comply with the specifications / standards.
product:
Plasma air equipment:
Description: It can quickly decompose formaldehyde, benzene, TVOC and other chemical harmful substances and odors in indoor air and kill bacterial viruses in indoor air; energy saving, safe and reliable;
1. Working principle of the equipment: According to the principle of corona discharge, the positive and negative electrodes are used to ionize the air respectively, generating a large number of balanced positive and negative ion groups. These ion groups can exist in the air for a long time to achieve sterilization and eliminate harmful gases. Neutralize the purpose of odor.
2, plasma ion tube material: internal vacuum glass tube and aluminum electrode, the outside is wrapped in stainless steel metal cover;
3. The ideal number of ionized glass tubes required should be recommended by the manufacturer to meet the special needs of different locations.
4. Plasma generating tubes, transformers, etc., and other device systems that provide safe and efficient operation to be installed in the duct.
5. There is a clear difference between the installation and the indoor air quality (formaldehyde, TVOC, etc.) without air purifier installed.
6. The connection between the ionization tube and the ionization tube unit should have a bayonet design to ensure quick disassembly during maintenance.
7. According to the air volume matching the corresponding products, the product adopts a single-end plug-in structure, the flange connection is fixed, and the flange is connected with the air duct.
8. Relative humidity within the range shall not cause damage, degradation or dangerous state inside the air purification system.
9. The product has passed the safety and performance certification: CE safety certification, provincial micro-inspection center performance certification.
10. Installation requirements, power supply requirements, location requirements, etc., depending on the actual environment (determined by the user).
11. The working time of the plasma air equipment is determined by the actual requirements of the user. The working time is long and does not affect the equipment. (The switch can be set automatically or manually according to the requirements of the user).
12. Due to the plasma air equipment, it is necessary to have a fresh air to drive the operation to achieve the ultimate effect.
13. After the purification equipment is put into operation, the indoor air will be significantly improved.